Over 80% of visitors who visit our site want to experience South Africa in an entirely new way. With a growing catalogue of unique cultural and community tourism experiences, Tour2.0 is uncovering the South Africa’s uniqueness one community at a time. Join our community and be the first in line to learn about the launch of new experiences, receive invites to exclusive Initial Public Experiences and receive exclusive discounts.

South Africa is a unique multicultural country that has 11 official languages. However, there are some commonly used words that are borrowed from all these different languages in order to build a diverse collection of local phrases that have a variety of meanings.

Some of these words and phrases can be daunting to both travellers and residents. That is why we are here.

"Maar Moenie worry nie, my Ma Sê Kind", having a translation guide will not only make it easier for you to understand what you are hearing, but it will also make mingling with locals more fun.

Here are some words & phrases to help you #Speaklikealocal when traveling our beautiful rainbow nation.

They’re many other ways to say “Hello“ in South Africa, such as: Heita! Aweh! Ola! Howsit! And even Sharp fede? which implies, “Hello, how are you?“. These are just some of the urban and rural greetings commonly used by locals which are deeply rooted with a real South African FLEVA! 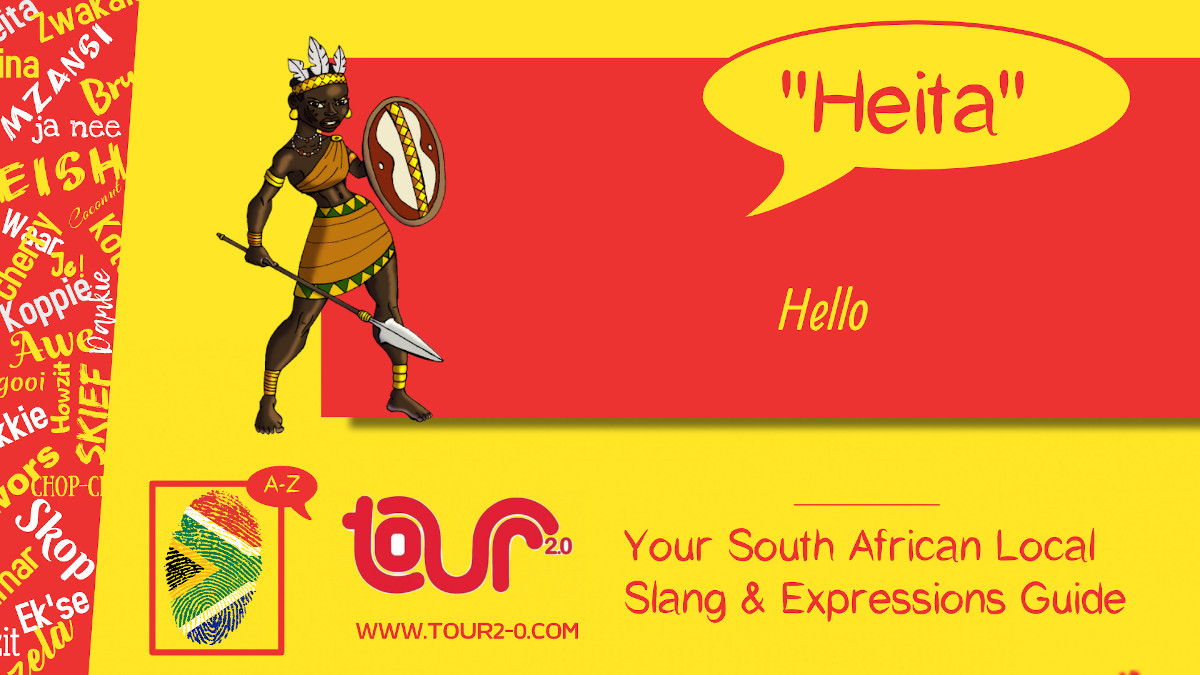 A Chommie is an Afrikaans slang word for friend. The word Chommie (Along with Chum) is the slang version of the Afrikaans word Tjommie meaning “Buddy”.

The uniqueness of our people, cultures, phrases and practices are unlike anywhere else in the world. Some will strike you upon arrival, others you will fully comprehend when you have made a few South African friends. Nonetheless, as Africans we have a quote which states your friends, friends are our friends too. This makes you my Chommie. 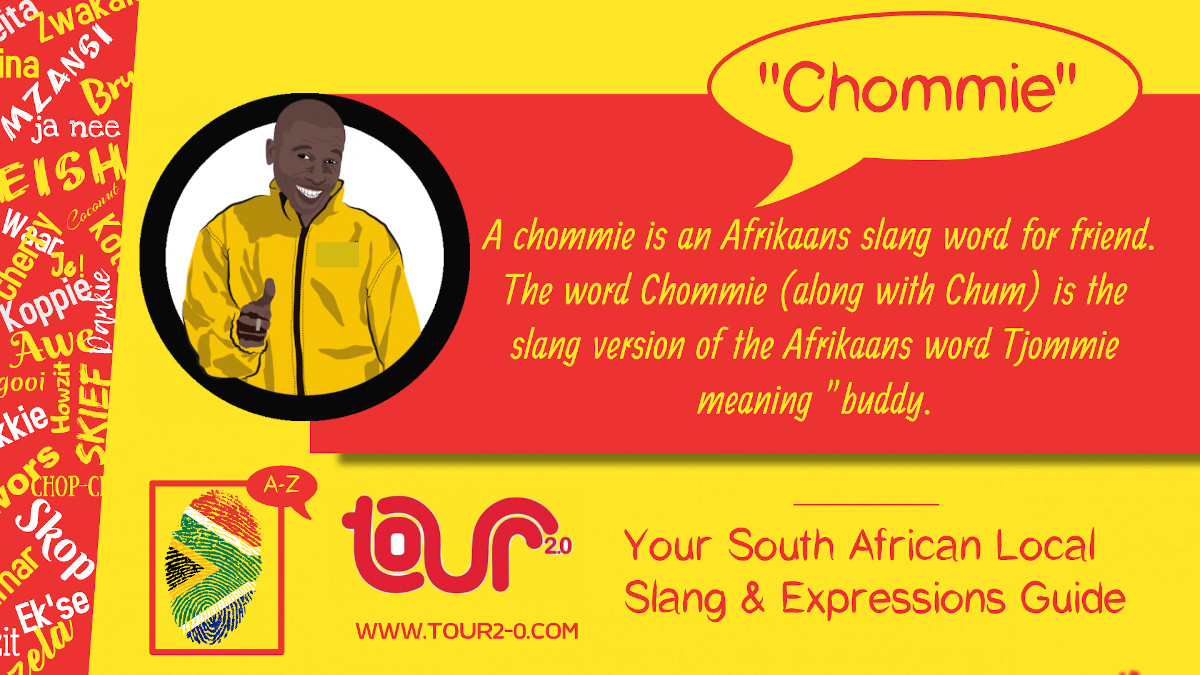 Sharp is often doubled up for effect (sharp sharp!) and means ’goodbye’ or that everything is great or as an acknowledgement of a request.

We have a South African phrase called “Local is Lekker“, which simply means the things that are homemade are often the best. Lekker means delicious in Afrikaans, but it is also used to describe something as nice, cool, awesome or okay. 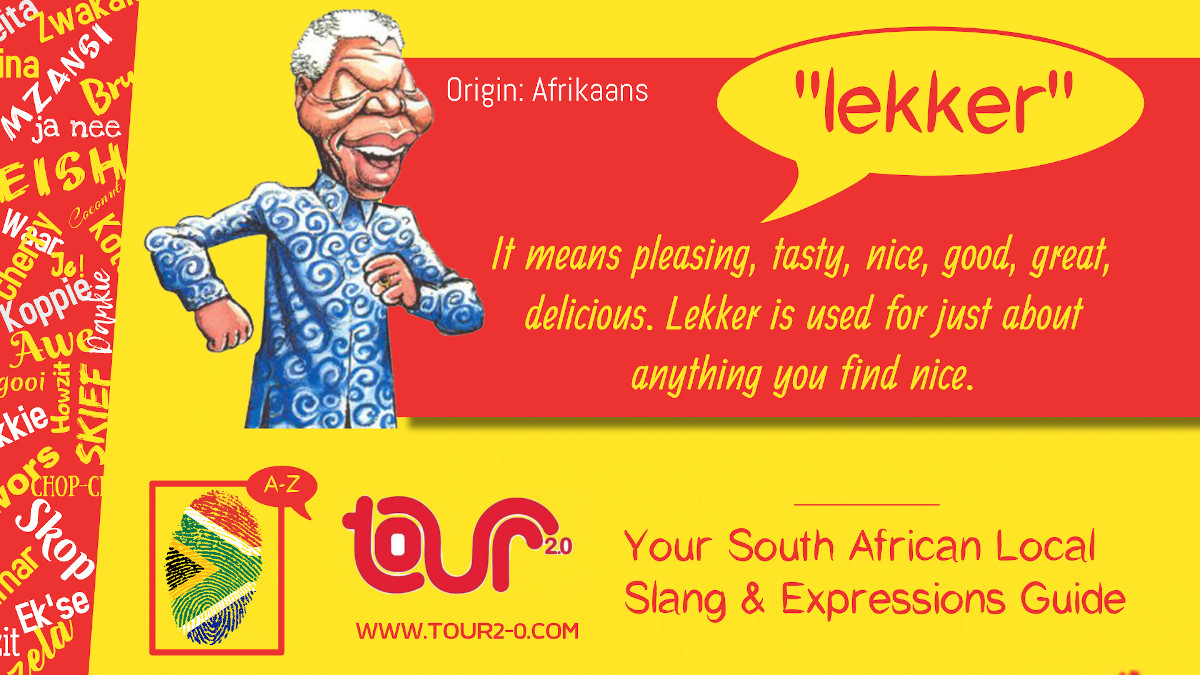 Braai is a widely used noun and verb for a barbecue, where meat is cooked over a fire or coal and it is one of the few things in South Africa that cuts across cultural and racial lines.

Regardless of language, culture, Mabena or Van Vyk, the love for meat cooked over a fire is something that brings South Africans from all walks of life together. 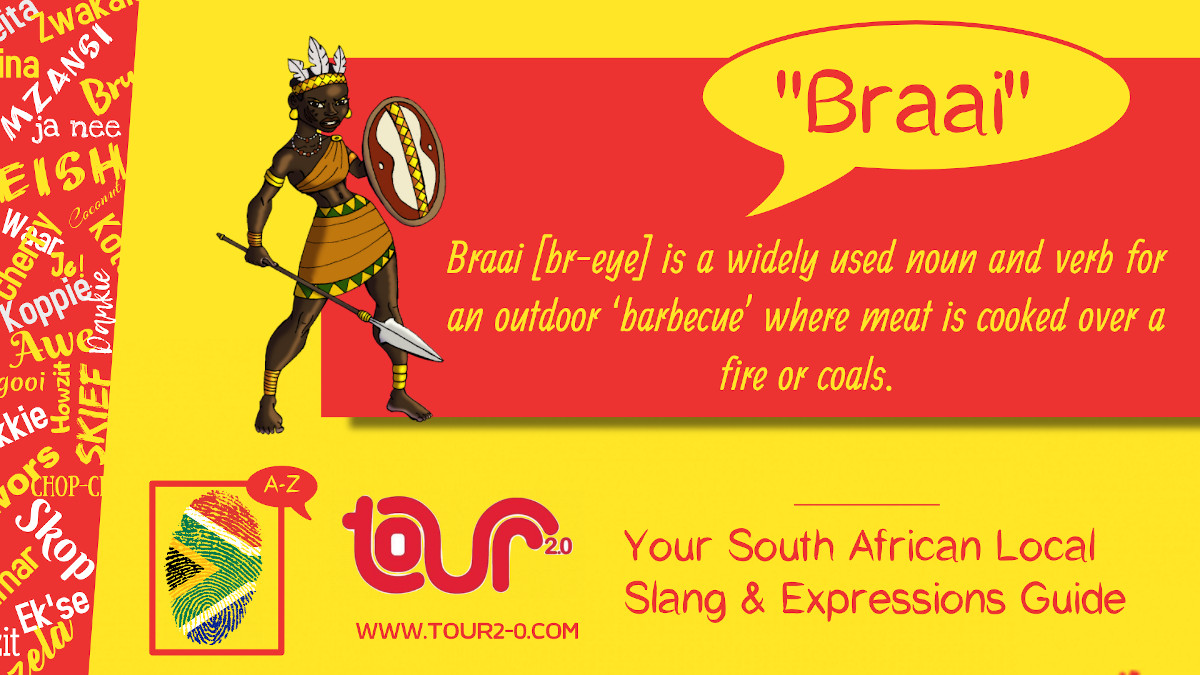 In South Africa “Just now“ doesn’t mean immediately, “babbelas“ is not a shampoo & our “Robots“ are not Humanoids. We are not at the stage where we have androids helping ease the traffic flow, yet. But, over the years South Africans’ have taken to referring to Traffic Lights as Robots.

The name originates from Traffic Guards, during the British colonization period, who used to move like robots when directing traffic. 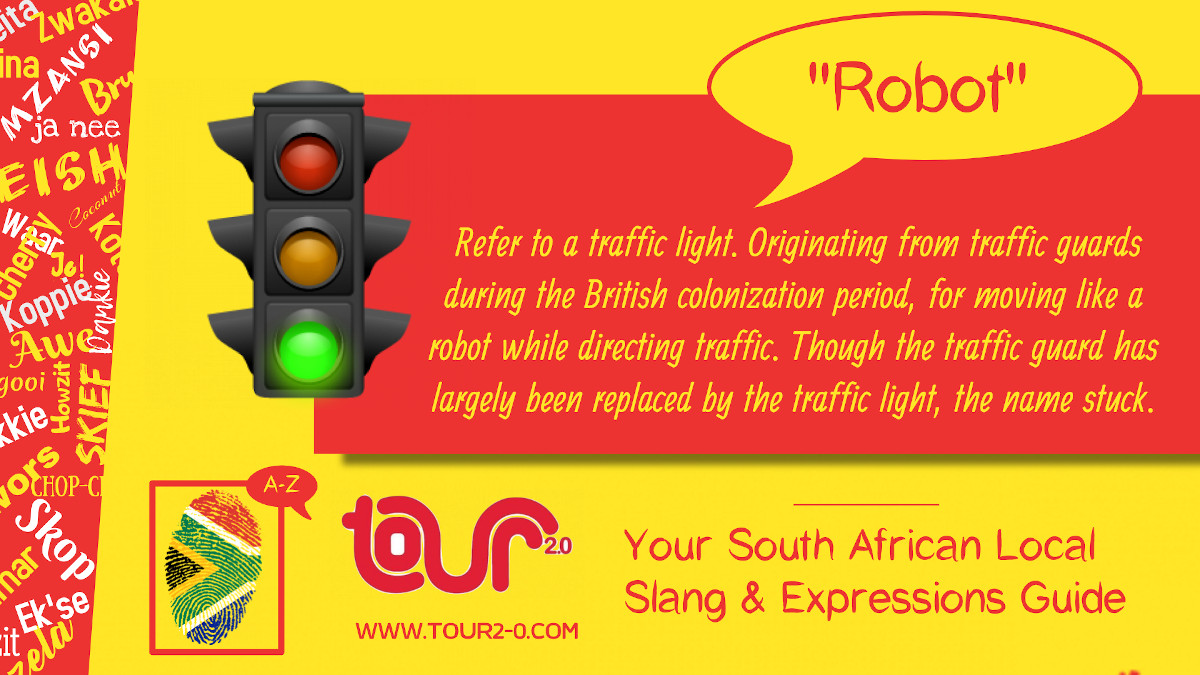 An all-time South African favourite snack that is made from meat that is dried and salted and is like beef jerky.

The Khoisan preserved it by slicing it into strips, curing it with salt, and hanging it up to dry. After European settlers (Dutch, German, French) arrived in southern Africa in the early 17th century, they improved the curing process by using vinegar, saltpeter, and spices (such as: pepper, coriander and cloves).

Eish is a uniquely South African expression that can be used to express anything from excitement to horror. 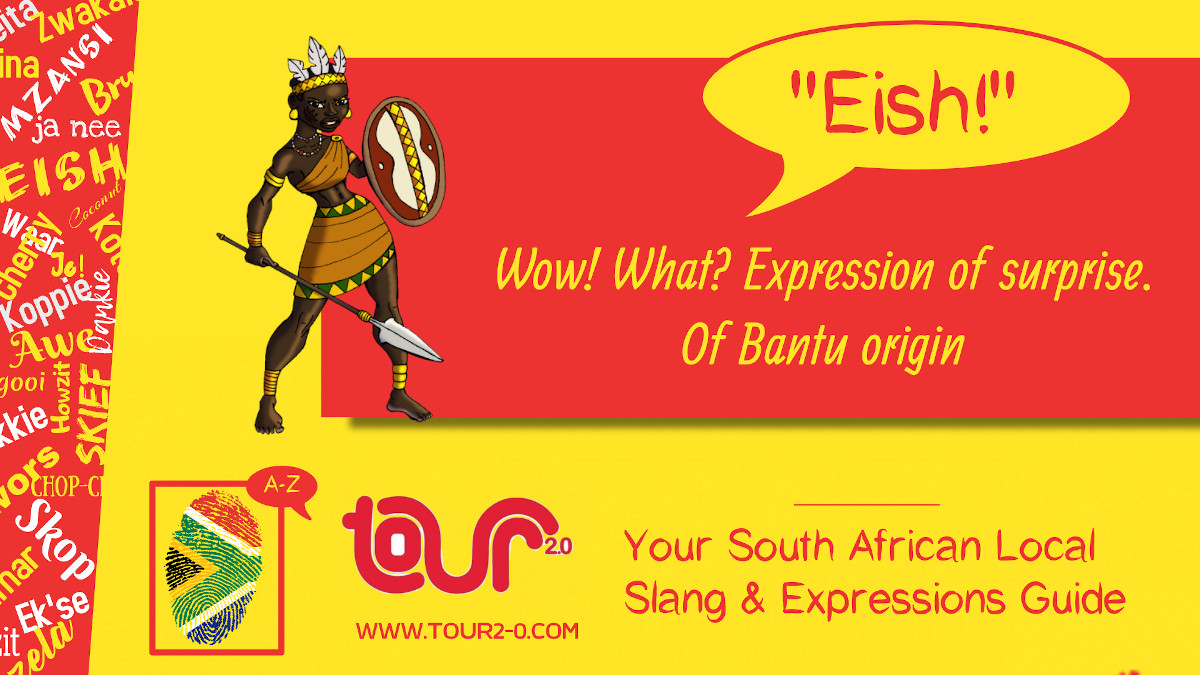 Means “Quickly“, is used when a person wants to have something done is a short amount of time. It is a derived by drawing comparison to the speed of how fast a task must be done to the speed of a knife chopping vegetables. 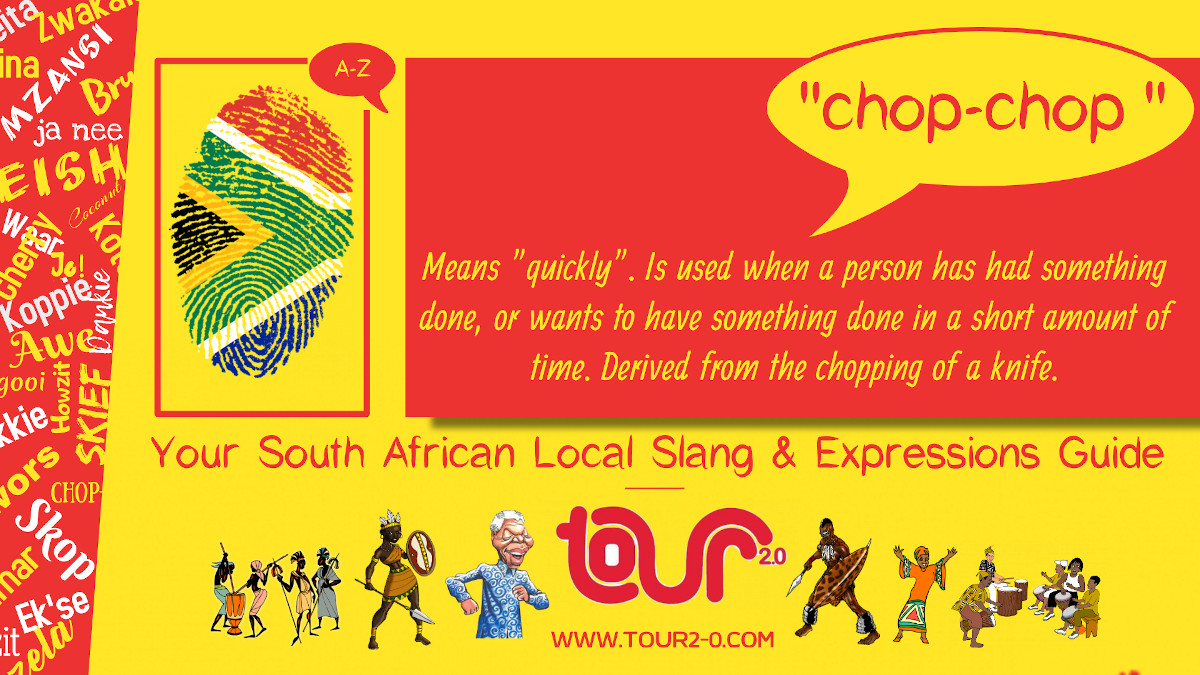 Shebeen used to be how we refer to an illegal tavern (informal pub) derived from the Irish word (Sibin). Its origins refer to unlicensed bars that were set up in the townships during apartheid and frequented mainly by black South Africans. It has since become a mainstream word that is used by all locals. 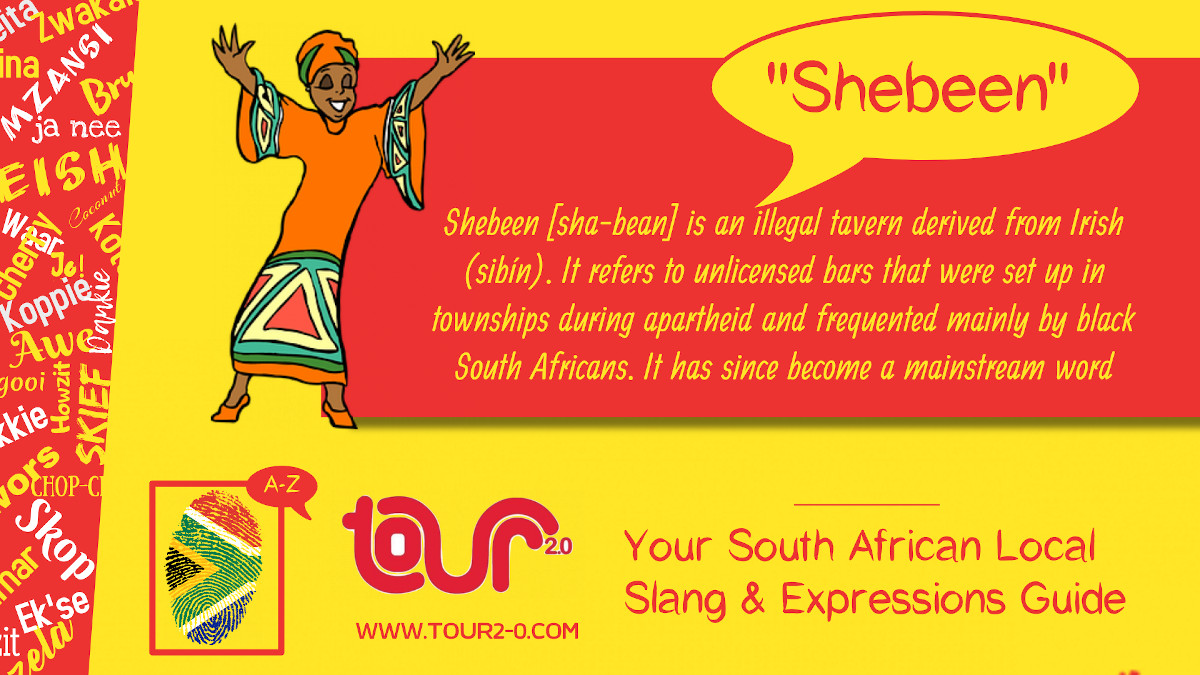 South Africans have a unique way of speaking. It’s not possible to have 11 official languages without creating a bit of your country-specific terminology.

This is just a snippet to help familiarise yourself with the slang to speak like a local on your next visit to Mzansi. Aweeh!

“South Africa is a unique multicultural country that has 11 official languages. However, there are some commonly used words that are borrowed from all these different languages in order to build a diverse collection of local phrases that have a variety of meanings. ”

Did you enjoy this article?